This month, in an ongoing effort to liberate my roomies from their desks, I finally put together a couch gaming setup, centered around Valve’s ultra-cheap streaming device, the Steam Link. Things have been stable for a while now, so I figured I’d do a quick writeup on the hardware I used and some of the pitfalls I ran into.1

Most of this was written at like 5 AM, so it might be a little disorganized, but hopefully it’s useful to someone. 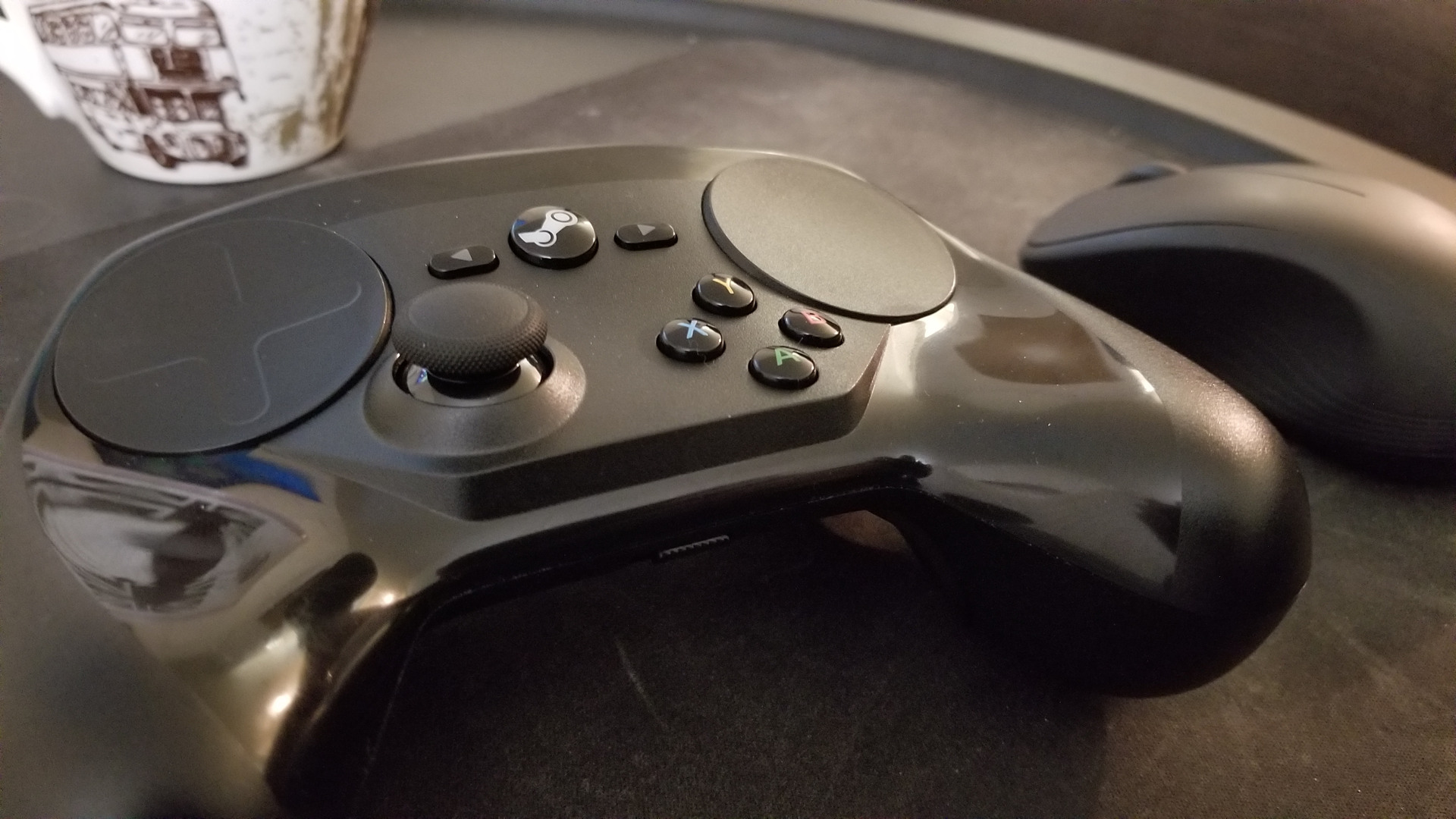 I picked up four Xbox One controllers2 for couch play. The Steam Link claims to support a wide range of controllers, but I also wanted pads that would work on our PCs without extra config. I tried my PS4 controllers on a whim (two DS4s and a Hitbox) and they seemed to work all right, but I didn’t do a lot of testing. Beware, here be dragons.

The Steam Link has built-in Bluetooth, but if you’re trying to hook up multiple controllers, it’s not worth your time. The first one paired fine, but the Steam Link struggles to pair multiple devices of the same type, and it took me nearly an hour to find the right sequence of reboots and pairing order to get it right. Similarly, a solo controller played fine, but multiple wireless controllers caused some major latency issues when all players were pressing buttons at the same time. This isn’t my usual “subframe latency or GTFO” nitpicking, either—it’s really bad.3 If I can get my hands on one later, I’ll test with the new Xbox Wireless Adapter and see how it performs.

In the end, I unpaired all the controllers and went wired instead. The Steam Link only has 2 USB ports, so you’ll need a powered USB hub if you want to hook up more than two devices—an unpowered hub can’t sustain output to 4 controllers, and it’ll drop them all periodically, causing a 10-second hitch as the Steam Link negotiates with the host PC before putting them all back in the wrong order. Once that was taken care of, everything worked pretty much fine.

I picked up a Steam Controller on a whim, and against all my expectations, it’s pretty much the perfect companion to our Xbox controllers. For anything a standard pad struggles with, like text entry or cursor movement, the Steam Controller is a suitable replacement—and for games that really need a second analog stick or a real d-pad, a standard pad beats the Steam Controller. The haptics are tuned just right, the trackpads have a nice matte finish to them, and Steam’s controller configurator makes it an incredibly powerful input device—more on this later. You’re not going to be a Quake professional with it4, but it’s a happy medium between the comfort of a controller and the power of mouse/keyboard. Also, it makes happy beeping noises when you turn it on.

If you’ve got a spare keyboard or mouse, the Steam Link will take those too. I keep a pair on one of our end-tables (keyboard via Bluetooth, mouse via Logitech dongle) for sorting out any weird configuration issues on the desktop. You can use them for games, too; the Steam Controller was a way better fit for our couch, but if you find it comfortable to use M+KB without a proper desk, go for it. Just beware of shitty wireless mice with built-in acceleration. 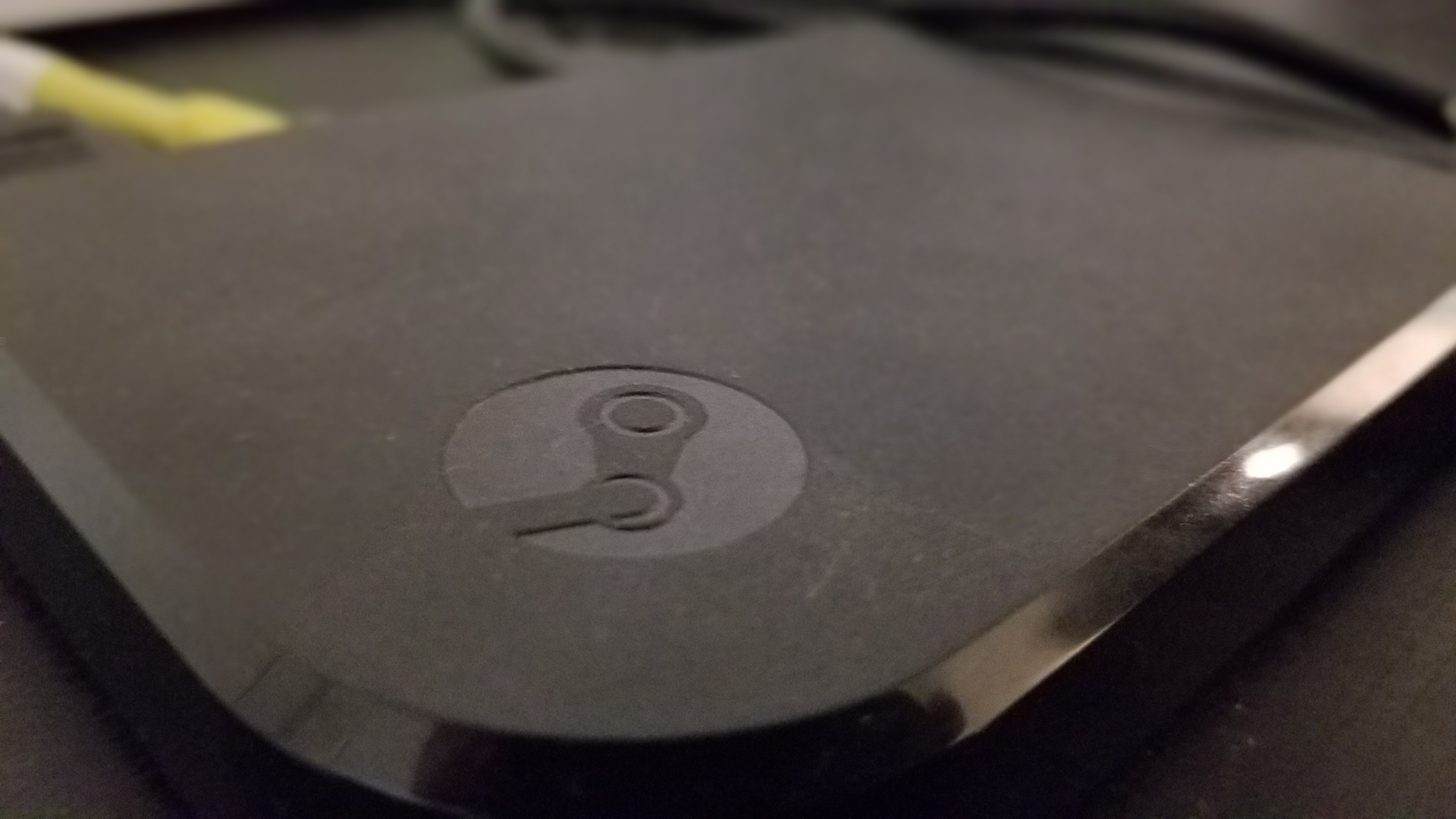 Okay, here’s the centerpiece. These things are $10 during almost every Steam seasonal sale—compared to building a living room PC or living with the limitations of a RasPi setup, it’s an easy choice. The device’s built-in UI feels unresponsive and sluggish, like a TV set-top box, but after the initial setup you’ll never spend more than 5 seconds there. A list of paired PCs is front and center; pick one to connect to that PC, launch Big Picture, and pass your input devices through.

Any PC with a modern GPU should be able to stream video with no problems—hardware encoding is perfect for streaming over LAN, and even the lowly Intel HD4000 has Quick Sync to do the job. Hardware encoding is enabled by default; if you run into problems streaming from your host PC, update your graphics drivers before you try to disable it. Most single-purpose gaming computers struggle with realtime encoding on the CPU.

Streaming video incurs some delay, but there’s a 99% chance your TV has more delay than the Steam Link, even in game mode. On our setup, with all host PCs and the Link wired to a gigabit router, the Link reports latency of under 20ms—our TV does 31. It looks pretty good too, though your mileage will vary depending on your settings and network. The “Fast” preset looks looks marginally worse than YouTube, but the “Beautiful” preset looks totally fine apart from occasional wonky black levels.

Actually, if you don’t have a decent wired home network, the Steam Link might not be for you. Powerline and WiFi users might get away with it, but you’ll want to do some testing5 before making the purchase. Distance, interference, and hardware quality are big factors. My boyfriend’s reported rock-solid latency on wireless, but 90% of the negative reviews on Steam are about how the Steam Link is “useless on Wi-Fi”, so tread carefully.6

Once it’s set up right, the Steam Link’s latency is low enough that it’s only an issue in edge cases—the types of situations where you’d want to use a monitor instead of a TV anyway. For fighting games in particular, the latency is no worse than regional netplay, so it’s perfectly fine for casual sets. 3D games are sometimes more distracting, since the delayed feedback can make it tough to orient yourself, but it’s never been a deal-breaker for me.

You can also install homebrew to run on the Steam Link locally, but in my experience, it’s not worth the effort. A native version of RetroArch stuttered on anything more complicated than the NES, and Kodi for the Link is an unstable and unresponsive mess. Fortunately, both of those things work just fine streamed from a PC.

A word on VirtualHere

VirtualHere is a paid third-party utility, designed to pass USB devices from the Steam Link directly to your host PC. I’ve used it to connect webcams and microphones for streaming, and you’ll probably need it if you want to use a weird input device like a racing wheel.

Unfortunately, it’s a fucking mess. The integration with the Link is made of popsicle sticks and duct tape, requiring menuing in 3 different places to even start the setup process, and it breaks with multiple of the same device just like the Link’s own pairing menu. Once it’s set up, it works, but you’ll have to do it again if you change the order of your devices, and—here’s the big one—the Steam Link can’t sustain a 1080p stream while sharing certain devices, turning into a jittery mess until you drop it to 720p. Yikes. 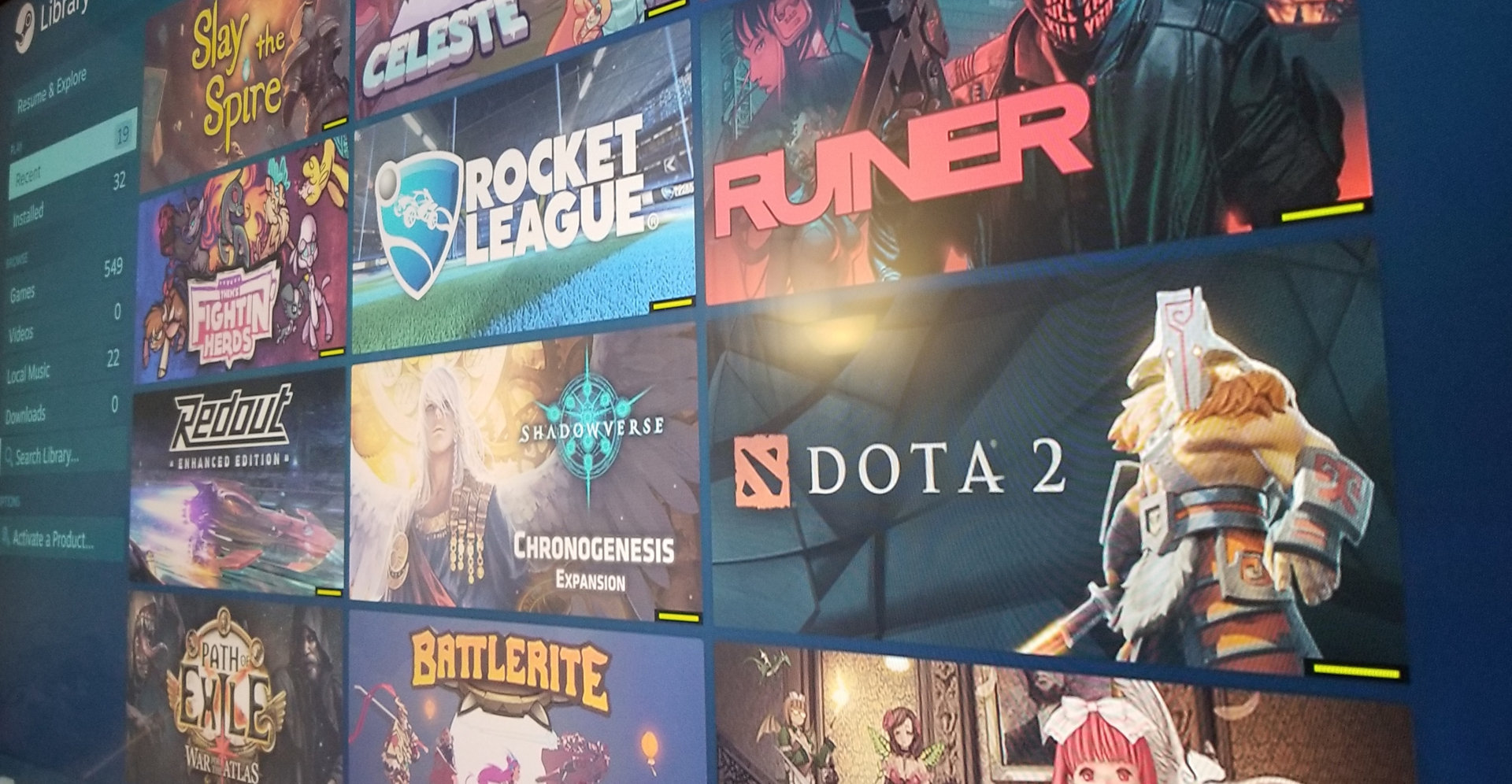 The Big Picture UI is aaight, I guess. All of Steam’s useless non-features are packed in here, but games are always front and center, with a one-tap option to return to whatever you were last playing. It’s light on customization and makes paging through large libraries kind of a pain, but as far as “let me play the fuckening video game”, it does its job.

As long as you stay within the Steam ecosystem, things are pretty much frictionless. Every Steam game I’ve tried worked first try, with no problems regarding video or controls. The controller configurator in particular is a fucking masterpiece, capable of setting up complex mappings with toggle buttons, predefined mouse clicks, and radial menus. You can even use and modify other users' configurations, sorted by popularity and total playtime. Seriously, this shit could probably turn a Taiko controller into a competitively viable Street Fighter setup.7

Step outside Steam’s walled garden and things get a little messy. Without Big Picture, controller support is limited and performance can be bad,8 but adding programs like emulators to Steam comes with its own set of caveats. I highly recommend you go to Settings > Controller Settings in Big Picture and enable configuration for whatever pads you’re using. Steam likes to be “helpful” and swap your controllers to a generic desktop configuration whenever it can’t find a game window: you’ll need those options checked in order to manually override it on a per-game basis. This was the source of a lot of bizzare problems for me.

Similarly “helpful”: when running from Big Picture, the Steam Link will crop the screen to show only the active window. For any games or programs with separate control config windows, and especially ones that like to use a lot of Windows message boxes, you might need to exit Big Picture or navigate from the host PC. In order to make sure Steam finds the right window, some emulators need particular launch options to load straight into a game. If RetroArch supports the systems you’re trying to emulate (it probably does), I recommend it for a low-latency, gamepad-friendly setup.9

I think that’s it. Have fun!