“I created this game for a certain kind of person, to hurt them.” —Bennett Foddy

Getting Over It bills itself as a masocore enthusiast’s dream, full of precision challenges and punishing setbacks. There are no tutorials, there are no checkpoints, and the game never fails to taunt you when you fall, Foddy himself voicing every jeer. It’s built to get you angry, and it’s quite honest about it: from a designer so fascinated with frustration, it seems only natural. For me, it was the perfect bait.

You are a man with a cauldron for a lower body. Your job is to climb a mountain made of garbage with only a sledgehammer. The hammer is defined by what it can’t do: it can’t find purchase in smooth surfaces, it can’t stay put if your weight pulls against it, and you can’t fit it through tight spaces without plenty of awkward maneuvering. The early moments teach you this silently and seamlessly: each area feels like a puzzle, wrestling with the cursor-only controls and the quirky, inconsistent physics until everything comes together at once, and you enjoy a few brief moments of satisfaction before moving on.

Sooner or later, though, you’ll make a big mistake. If you’re like me, you’ll forget that the hammer’s physical extent never turns off and accidentally launch yourself off a cliff. But there are plenty of other ways to fuck up bad, and they all end the same way. Your cauldron hits the ground with a dull, metallic thud. Bennett Foddy offers his condolences in the form of an inspirational quote. And there’s a sly little jazz sting,1 an auditory replacement for Foddy’s smug, apologetic smile. “I know what happened to you,” it says. “It was supposed to happen.” There’s no save to reload and no checkpoint to return to. You’ve got to climb your way back up.

It’s about frustration, supposedly. I never got it.

Getting Over It isn’t shy about erasing your progress, but it never felt like I was fighting my way back up. Once you’ve finished a section, you can finish it again in a fraction of the time. It’s never about herculean feats of dexterity or precise timing: it’s about finding the right places to stand and the right places to plant your hammer. Once you know, it’s over. It’s automatic. But it still needs that minimum fraction of your attention and your time.

There are exceptions, of course. The garbage mountain has a handful of brief and brutal difficulty spikes, short sequences never lasting longer than a few jumps. They’re always placed at the end of long, placid climbs and invariably dump you a few screens back if you fall—more than anything else in the game, they’re built for you to fail. The game’s most memorable moments are nothing but steep angles and awkward overhangs, one-off setpieces designed to test skills you haven’t practiced, and they push the awkward controls well past their breaking point.

It feels like I’m falling into a trap by complaining about the controls. Foddy’s responsible for QWOP, after all, a game entirely defined by its deliberately-impossible control scheme.2 Getting Over It’s controls have some clear shortcomings, but I don’t know if I believe that they’re accidental. Maybe the controls are just another piece of the ensemble, working alongside the dull sound effects and the smarmy jazz stings to slowly get you boiling, but I don’t really think it matters.

The fact is, these Designated Failure Points are the only challenge in the entire game,3 and it’s a kind of challenge the controls don’t support. Your mouse movements are only vague suggestions to the on-screen cursor, and there’s another vast layer of abstraction between that and the hammer. The camera drags awkwardly on your cursor when you move quickly, your mouse sensitivity changes wildly whenever you pull the hammer in close, and the cursor itself is almost totally invisible on light or busy backgrounds. In the game’s hardest edge-case jumps, the lack of consistent feedback turned my curiosity into resignation. My chances of success were a function of time more than anything else, and the fastest way to make progress was by avoiding the controls, not mastering them.4

It wasn’t frustrating. It was boring.

The honeymoon wore off, and I realized that this was it. An interminable crawl up the trash heap, punctuated by a series of meaningless jumps endlessly retried. Whether I succeeded or failed didn’t matter—forward or backward, it was just more of the garbage mountain, endlessly retrying the same section only to be rewarded with the same experience on a different background. A scant handful of new mechanics are left for the game’s final moments, never explored and gone before you know it. The most emotion the game got out of me was over a jumpscare. Yes, an actual jumpscare, complete with distorted screaming. I imagine it was supposed to shock players into fumbling the controls, but even as I raged about the dishonesty of such a cheap trick,5 I almost appreciated the game for giving me something to care about. 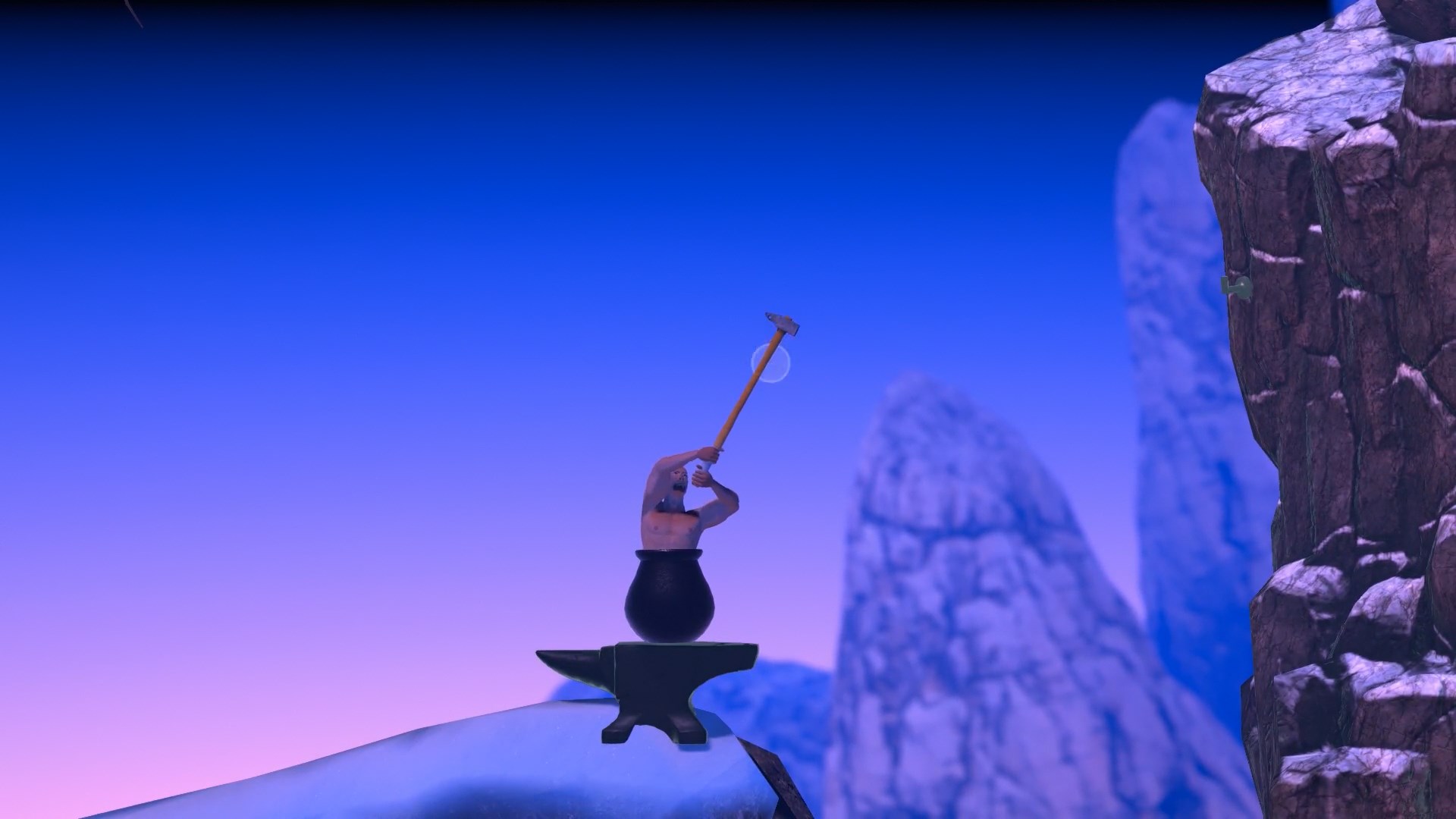 “An orange is sweet, juicy fruit, locked inside a bitter peel. That’s not how I feel about a challenge. I only want the bitterness. It’s coffee, it’s grapefruit, it’s licorice.” - Bennett Foddy

People are programmed to seek challenge—not for the challenge’s sake, but for that cycle of tension and release, frustration and elation, practice and payoff. We seek those emotions in other places, too, from carnival games to horror movies. They’re powerful motivators, and they’re everywhere. They feel right.

In that sense, Getting Over It has a certain unorthodox purity to it. It’s about isolating the dark side, intensifying it, recentering the whole experience around it. It’s something I’ve never seen done in games before. Maybe it’s something you can only do in games, and there’s something interesting about that, maybe even something noble. But without the light side, there’s nothing to strive towards, no reward for the game to hold tantalizingly out of reach. And if there’s nothing withheld, is there still a reason to care?

In games, there’s a greater sin than being frustrating: being nothing at all.
Getting Over It with Bennett Foddy on Steam