Network effect is a bitch.

I live online. No matter what I’m doing, I want to reach as many people as possible, because I’m a human afflicted with vanity and ego—and, more importantly, because I’m trying to stay alive by crowdfunding whatever you’d call my interdisciplnary internet katamari. People are comfort, people are currency, all things are terrible.

To that end, I use services I hate all the time. I use YouTube because it’s the most practical way to publish video to a large audience, I use Twitch because it’s the most stable way to get a livestream distributed throughout the world, and I use Twitter because it’s the best way to put my projects in front of as many eyes as I can. But all of these services (and a hundred more) are shitty and manipulative and designed to coerce people into acting against their interests, usually to continue the neverending bullshit vortex that is Internet advertising. Plus they usually suck ass in terms of actual functionality.

I tell people to use content blockers all the time, and I try not to benefit from advertising as much as I can, but it doesn’t shake the slimy feeling I get from relying on fucked-up vampire megaconglomerates. Even without ad revenue, these services profit from the people on them, monopolizing as much of their attention and time and data as possible—and even without a direct return on investment, one more person on a service like that is a step closer to “Well, everyone else is there…”

I can’t win in every situation; stuff like internet video doesn’t really work at scale without deeply flawed peer-to-peer solutions or un-fucking-real amounts of resources. But when I first saw Mastodon—a distributed, self-hosted social network, built on the concept of small, interconnected communities—it stuck with me. Today, a small wave of Twitter users are migrating to Mastodon after Twitter killed every third-party client. Meanwhile, I’ve decided to experiment a little and host an “instance” of my own. 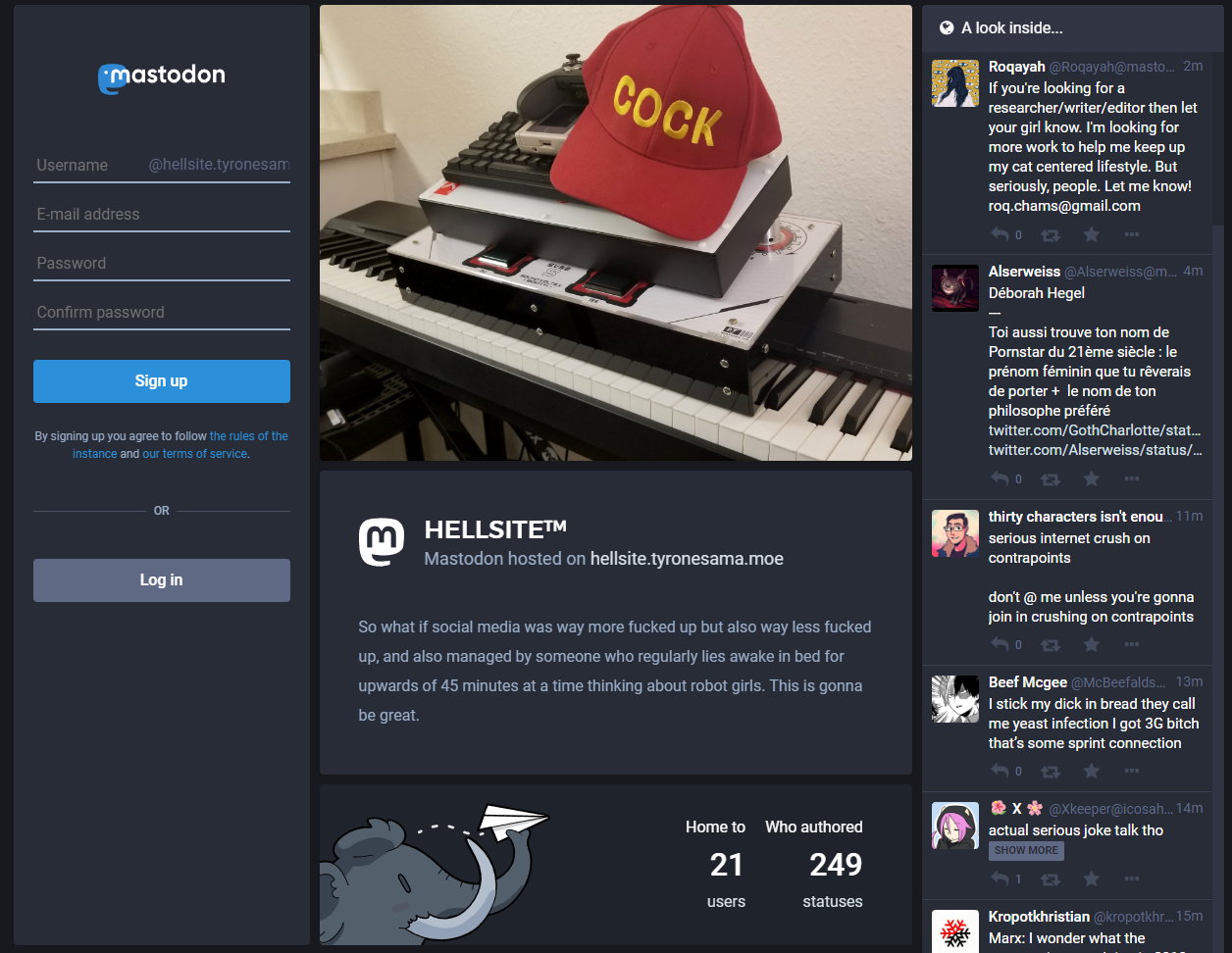 Right now, you can head to hellsite.tyronesama.moe and sign up for an account—but you can also sign up for any other instance that strikes your fancy, or even host your own. Every instance is linked by mutual connections; an instance’s staff have complete power there, with the ability to moderate and control content however they please, but their power is limited to that specific instance, limiting the scope of bad actors from both directions. From a user’s perspective, if you find another instance you like more, you can migrate to it whenever you want, so you’re never locked in if an instance’s staff or culture don’t mesh well with you.

The UI’s also pretty solid, with a default web UI that echoes TweetDeck, but with a handful of options for alternative clients available, plus a surprising amount of userstyles. If you’re looking for a mobile app, I suggest Tusky on Android, but there are alternatives for that too.

I don’t really know what I expect to happen here. I’m taking a break from Twitter while I get a feel for Mastodon’s strengths and weaknesses, and I don’t really have any expectations for what’s going to happen down the line. But if any of this sounds interesting to you, I’d love to have you along for the ride—and if you feel the same as I do, then maybe it’s time to beat the network effect.