It’s Friday morning. Sun is filtering through my blinds, birds are chirping outside, the smell of bacon wafts through the air, and I wake up 10 minutes before my alarm, feeling rested and refreshed. Everything’s perfect until I check my email. 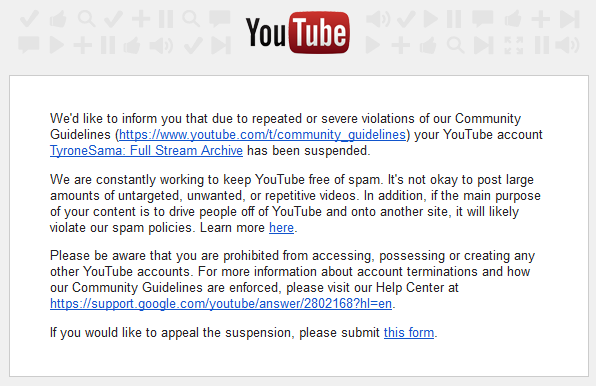 That channel is where I post my livestream VoDs to archive them—more than 300 videos, gone without any warning. I guess you could call it spam, if you’re interpreting that via the whole “every action we will ever take is meaningless and our planet is naught but a mote of cosmic dust” thing. But according to every reasonable definition, and the YouTube Community Guidelines, my channel was within the rules. 100% unique content, owned entirely by me, no commercial advertisements or offsite redirects.

This has happened to me before. My main YouTube channel was taken down for absolutely no goddamn reason a year ago, and after clawing my way through 600 layers of defunct Google+ pages to find the nonexistent email address that had been silently assigned to my “brand account”, I appealed and things were taken care of quickly. (The appeal was denied, but my account came back anyway, and to this day I’ve decided not to question why.)

This time, though, my appeal came back with a hard no—and my account disappeared. Not just “This channel has been suspended,” but “That channel doesn’t exist, we’re not fucking around.” Whatever had happened this time, it was different.

I had one clue regarding my suspension: an email sent a few moments before the suspension notice. One of my Redout streams, months old at this point, had received a Community Guidelines strike for spam. The email quickly reassured me that my account wasn’t in any danger yet, and that I would only be suspended after my third strike. Naturally, my suspension notice arrived 2 minutes afterward.

The video was titled “here in my garage with my new lunare”, a nuanced and multifaceted joke about a certain YouTube anti-celebrity and his unspecified number of Lamborghinis. My memory’s not perfect, but as far as I could remember, it was just a normal stream. Not even a Content ID match on it, since I only played the in-game music. Nothing seemed to distinguish it from my other Redout streams, or from any other video on my channel, unless a YouTube rep found the dated reference offensive.

I submitted another appeal, taking special care to provide the URL of the affected channel, the video that received a strike, and plenty of explanation of how my channel couldn’t possibly be violating Community Guidelines. This time, instead of being denied in a few hours, it was denied in under 45 seconds, which at least saved me some waiting time.

I went to Twitter and Reddit, as one does when automated customer support fails them, and Reddit responded fast. Apparently, I was late to the party—I wasn’t the only one who woke up to a random spam suspension this morning.

Everthing was happening in a massive megathread on the YouTube Help Forum, which is how I knew everything was really fucked this time. The YouTube Help Forum is the last, most desperate resort that exists in the YouTube support ecosystem. You never go there of your own volition, unless you really like waiting 3 days for people to quote support articles you read a week ago.

The problem came down to the words “new lunar.” Somehow, almost every video on YouTube with these two words in the title had been detected by the spam filter overnight, and every associated channel scrubbed from the face of the earth—through the magic of substrings, my Lamborghini joke had gotten caught in the crossfire ("new lunare"). Months of footage had been wiped off the site because a robot didn’t like my joke.

At this point, I realized that my only allies versus this faceless megaconglomerate corporation were bronies, and my stomach came to rest somewhere in the area of my knees.

Anyway, if you’re a well-adjusted human being instead of an automated antispam algorithm, you’re probably wondering why “new lunar” tripped the filter—and tripped it so hard that channels were wiped off the face of the Earth with only one strike.

The natural place to go is a YouTube search. Somehow, even after the ban wave, a fuckton of videos remained, using Unicode shenanigans to dodge automated detection.2

So YouTube thinks I’m trying to upload Bad Asian Television, and all the other activity under the New Lunar title is bot mishmash designed to bait people onto scam sites. I…guess I can believe that?

Back to the megathread. If you’re on the YouTube Help Forum at all, you’re already fucked, and everyone in this thread seemed to instinctually know this. Even through text, the atmosphere was like a DMV line leading to a lethal injection table, the lone YouTube rep in the thread a prison warden praying for death.

Mr. or Ms. Warden had pinned a post to the top of the page, written in English as a second language, making sure everyone would see it first. According to them, there was nothing to worry about. All of these problems would just go away if we appealed our suspensions and Let Things Continue. “Appeals process is handle by real people,” they reassured us. Oceania has always been at war with Eastasia.

Every single appeal came back denied. After a few hours of non-answers, the rep happily reported that the “New Lunar” issue was fixed, and everyone should resubmit their appeals with some extra information. Unless you’d followed their instructions and appealed already; then the system would automatically lock you out, and you should wait a minimum of 4 weeks before appealing again.3 Any attempt to bypass the automated lockout would result in the instant destruction of your account.

The thread began speculating that YouTube was discriminating against bronies.

Fast forward 24 hours, and after a series of massive miscommunications from a rep that clearly wasn’t getting paid enough (or at all), everyone’s accounts were restored, mostly. Another normal day for YouTube’s dilligent orangutans. I’d lost nothing but a day of subdued anger, a little faith in artificial intelligence, and some space in my email inbox.

One thing left me curious, though. I’d never seen any of the videos affected by The Great Lunar Purge—only what remained afterward, clinging to life on a character set technicality. If YouTube had reverted the spam filter changes and restored every affected channel, what would I be able to find now? What could possibly motivate them to try and ban the words “New Lunar” from the site outright?

One day later, a search for “New Lunar” turned up a lot more videos, some with millions of views. All the old nonsense was there, but with more videos to scroll through, new patterns started to emerge. Templated crops and warps to dodge Content ID. Stock footage and animations over random, disconnected music. Long, mangled titles, fit to trend-surfing algorithmic templates. The soap operas were still there, but always hidden behind a misleading thumbnail.

The majority of these uploads are almost certainly automated—or, like the humans supposedly in charge of YouTube suspension appeals, very good at pretending to be automated. That’s not hard to wrap your head around; there’s been a lot of conversation lately about procedurally-generated videos, and it’s hardly a new phenomenon. But the phrase “new lunar” doesn’t even turn up anything legitimate in a Google search; the phrase has entirely been consumed by this bizzarre JAV/soap opera mixup. Where the fuck are these views coming from? Who is in these tags looking for anything?

For that matter, what’s the goal for these uploaders? Are these channels somehow passing AdSense reviews and getting approved for monetization? Some of them are trying to redirect to external sites, but just as many are being used by other bots to push other sites. Are the views and subscribers on these channels just more bots?5 The comments are incomprehensible garbage, but how many of them are bots, and how many are humans stupid enough to be searching for porn on YouTube? There are certain common watermarks on some of these uploads, are the bots reuploading videos from each other? Are there any humans involved in this endless circle of automated spam? Is this how the singularity starts? Is this how World War III starts?

WHAT IS FUCKING HAPPENING?

Bots are way better at creating noise than doing anything useful. That should come as no surprise to anyone, especially if you’ve seen my Markov chatbot trying to participate in conversations.6 But it’s a problem for Google, a company that seems intent on solving every problem with more AI, even when that AI isn’t great at context.

It’s way easier to flood a service with automated garbage than it is to automatically remove that garbage—and if you’re trying to keep the rules general, it gets way harder, just a giant clusterfuck of dueling algorithms getting caught in local maxima until something snaps. But YouTube is doubling down on the automation, even preemptively demonetizing random videos in recent weeks. There aren’t many humans left in the process, and YouTube deals with so much traffic that they can’t really do anything but steer you towards the automated system.

For now, YouTube’s probably not getting any better. Despite the site’s ubiquity, their profit margins are reportedly razor-thin at best. Google’s always coy about their business stats, and I’m no CEO, but it’s unlikely that they’ll be expanding their staff anytime soon. So we’re stuck with the bots—and companies around the world are following suit, chasing automated dreams when the technology just isn’t there. Give it a few years, and a New Lunar-style fuckup might hit something a lot more important than My Little Pony videos.

But so far, nobody’s fucking up quite as bad as YouTube.