UPDATE: The game’s recieved some patches since launch; most of my gripes have been resolved. 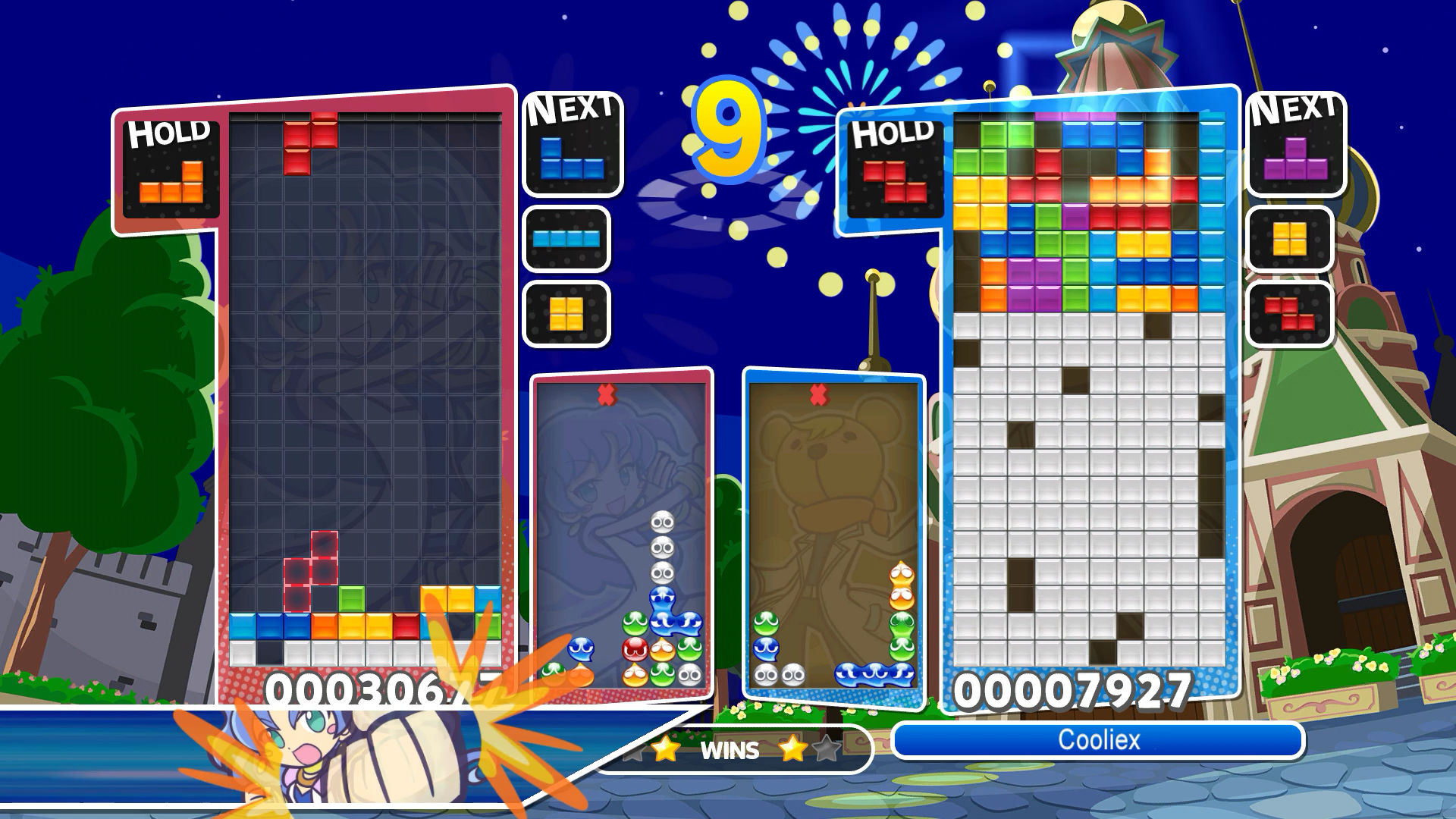 Compared to the console releases,1 Puyo Puyo Tetris’s Steam debut comes with a handful of big perks and a fuckton of drawbacks. It’s likely to recieve some fixes for the obvious issues soon, but until then, here’s a brief rundown.

The Steam release is the first version of the game to include dual audio, which is pretty cool and was widely advertised. What they didn’t advertise, probably because it’s fucking embarassing, is that this is also the first version of the game with a voice volume setting. The constant chirping can be grating to anyone who didn’t grow up with BAYOEN perforating their eardrums, and I appreciate the quiet.

Keyboard controls are fully remappable in-game, with a proper UI that matches them to actions instead of gamepad buttons. There’s even space for duplicate bindings, for some reason. You can bind mouse movements in the same way, but it works about as well as Tetris Party’s Wii Balance Board support—which really isn’t a failing of the port. On the other hand, navigating the menus with the mouse feels perfectly netural, and it works everywhere I’ve tested.

SEGA’s also slowly figuring out how to do gamepad support right; this release makes use of Steam Input to support both XInput and DInput pads.2 Like the console releases, controller rebinding is limited to a handful of presets, but the Steam controller configurator can fill the gaps in a way that wasn’t possible before. Just make sure you have support for your controller enabled in Steam’s settings.

Local multiplayer works great, supporting any combination of gamepads and keyboard,3 though you’ll need to restart the game when plugging a new pad in. The input selection UI is a little potato, but unless you have surplus pads plugged in, it won’t cause any problems.

Fullscreen is available in exclusive and borderless flavors. There are no graphics options besides resolution and Vsync, but both of them seem to function as advertised—and given that this is a fucking falling block puzzler, leaving my 970 at a comfortable 4% utilization, I’m not going to gripe about the lack of TXAA.

Some users have reported disconnects or stalls in online play. I wasn’t able to reproduce any of those, but I can confirm that Puzzle League’s mode filter is broken; no matter what modes you allow or block, you can be placed into a game of any type.4 You’ll have to manually exit game modes you don’t want to play.

The default audio mixing is horrible—BGM needs to be at 50% volume or it completely drowns out all other sounds. There are a fuckton of bizzare audio quirks, like Zed’s missing voice filter, music looping wrong when you tab out, language changes only partially taking effect until a restart, a wide range of audio glitches specific to Adventure Mode, and at least one alternate character voice being straight-up missing in the game files. Oh, and it mutes on lost focus with no option to disable it. No idea what the fuck happened here; the audio issues are easily the biggest set of missteps.

I wasn’t able to change my resolution from 540p in windowed mode. Resizing the window “worked”, but led to smeared, ugly scaling. There’s no support for non-16:9 aspect ratios, and the game is locked at 60fps, to absolutely no one’s surprise. I guess my dreams of buttery-smooth Puyo drops will have to wait.

There have been widespread reports of crashes, and some less common complaints about UI artifacting, but they seem to mostly be centered around Adventure mode, and I wasn’t able to reproduce any of them. Normally I’m inclined to shrug this stuff off, but the complaints are widespread enough that I’d still be somewhat wary.

If you’ve been waiting for Puyo Puyo Tetris to hit PC for a long time, you can probably pick this one up without worrying too much.5 If the PC release will be your first time with the game, you might want to wait until the issues are ironed out, especially if you’re interested in going through Adventure Mode.

Check out the Steam Discussions page if you’re on the fence. These issues weren’t dealbreakers for me—the foundation of the port is good, and these are self-contained gripes that will likely be fixed in time—but your mileage may vary.