Bethesda, it’s not a “closed beta” if you give out keys to everyone who clicks a button. 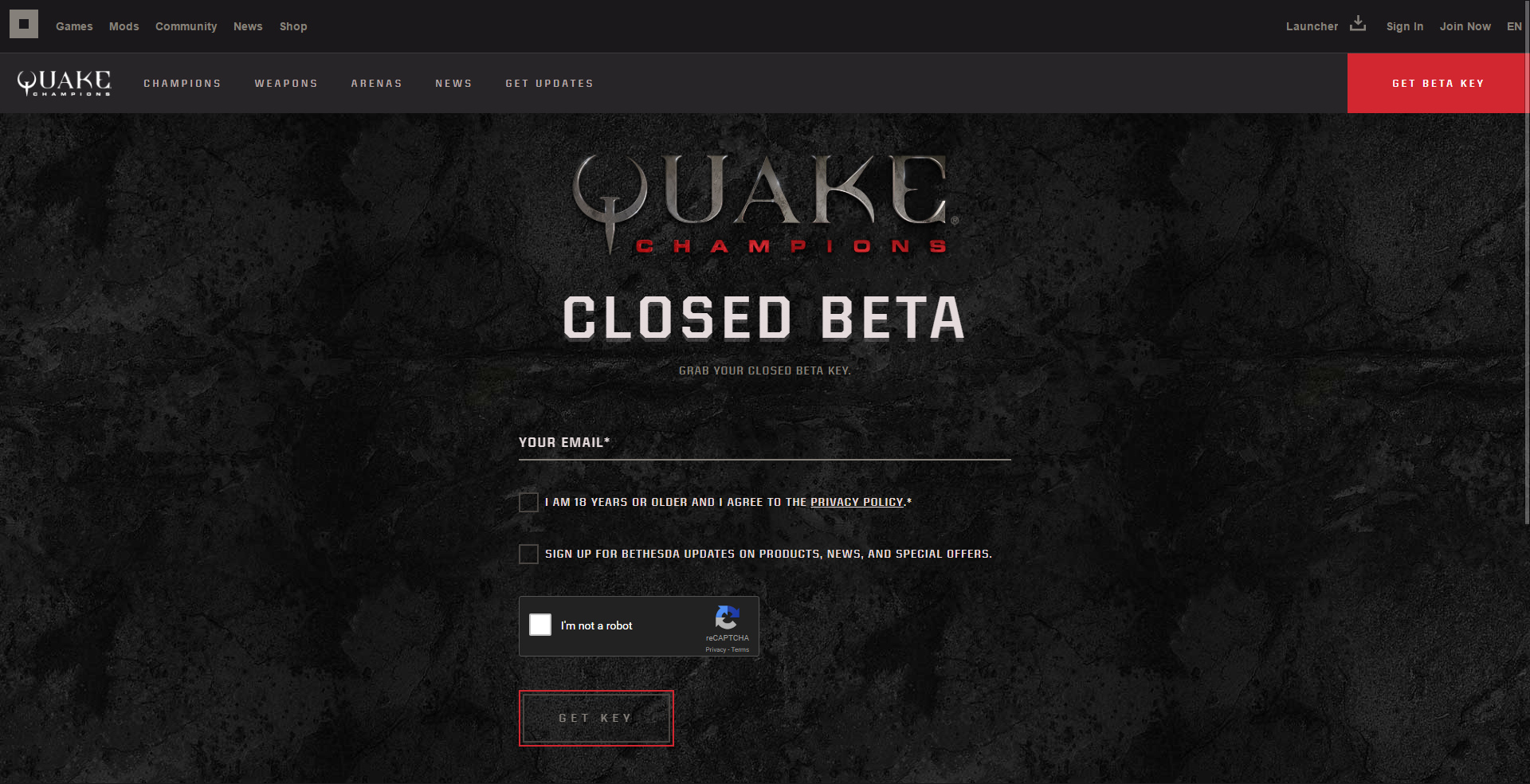 The game seems…okay? I’m sort of divided on this one. Menus are super rough around the edges, performance was inexplicably bad in the most inconsistent ways, and abilities feel completely out of place. But it still feels like Quake, and Quake feels fucking good.

Visually, the game is all right. Maps are a little messy and colors tend to bleed, but players are clearly marked by overhead chevrons, so they’re never really hard to see. It’s not fullbright green models, but it’s at least something. I never really noticed the cosmetics, which is a pro or a con depending on who you ask. I also ended up with a broken lightmap at least once, which turned half the map into a normal-mapped black void. Weird shit.

The sound design is sort of shit. Huge reverb everywhere, it’s hard to pinpoint the origin of sounds, and I was constantly getting blind-sided by silent teleporters. The music is pretty unintrusive, and after playing Reflex for so long, it’s nice to have a little in-game ambience.

Mouse feel is a little awkward, and the inconsistent performance doesn’t help it any. Some matches were mostly fine, but others stuttered to completely unplayable levels, even on lowest settings. Render scale didn’t seem to help when the game was freaking out, so something was probably CPU-bound, but I’m using an i7 with plenty of headroom…thonk.

Netcode might be fucked up. I’m not sure. Players seemed prone to small warps in close-range hitscan fights, and I swear I got killed by a teleporting shotgun-wielder at least a few times. Hit registration feels pretty generous, especially for rail, and at super close ranges it’s anyone’s guess where you’re getting pushed. I’ve also died to Gauntlet while clearly out of its range, but only once. My gut instinct says that the shooter’s advantage is a little too strong, but I haven’t really spent enough time to verify.

Weapons feel like Quake. Not really sure what there is to say on that. The machine guns have an uncomfortable amount of spread for my tastes, the LG feels like shit, and rockets/rail are god, but anyone familiar with arena shooters will feel right at home with the selection. You have the option to start with a weakened version of the shotgun or the nailgun, replacing the usual MG start, but I didn’t make much use of it. The railgun gets increased damage while zoomed, which I fundamentally disagree with, but in practice it didn’t seem to affect me much. Maybe better players will make better use of it.

Map design seems like a mixed bag. QC’s rigid movement makes it harder to move around than I’m used to, but the map designers seemed to think that you have CPMA air control. This game’s version of Campgrounds felt like a fucking mess, but everything else was at least playable. Weapons respawn ridiculously fast, at least in the modes I played (haven’t touched duel yet), so long-term fights will often clump up around rockets in particular. Large pickups spawn in easily contestable areas, just like usual, but smaller pickups take you on awkward detours away from the main lines, though maybe it’s just me not being used to movement yet.

Oh yeah, this game has timers. Major items are replaced with a radial timer when picked up. It’s a nice compromise—you’ll know exactly when items come up, as long as you remember to check—but might turn off some purists. Then again, those purists are probably still playing QL and don’t want shit to do with this game anyway. Quad damage gets a map-wide callout in addition to its radial timer: it feels less powerful than it does in other arena shooters, but quad fights are still a delightful mess as long as the sightlines aren’t too long. Rail is really fucking oppressive in this game sometimes.

Hero designs. Oh boy. I appreciate the design philosophy: each hero has unique health and armor, plus their own movement quirks, and a single flexible ability. I got most comfortable with Ranger’s Dire Orb, which was working 4 jobs as a gap-closer, combo tool, escape option and movement skill. Making use of that cooldown in the right ways was pretty satisfying. Activated my almonds, as they say.

A lot of hero abilities seem designed to function as a free escape, though, and many of them carry a lot of space control with it. It feels gimmicky, and the medium-length cooldowns mean that you’re never really sure who has their skill up in the first place. Feels like it’s better-suited to premade team play, where a group can coordinate and punish ability usage. It feels sort of neutral to me. Like, okay, more movement options, I can dig. But the free outs are a downer. I don’t think I’d enjoy the game more or less without them.

In the end, Quake Champions is still Quake. It’s diluted and weird, like it was developed on some other timeline and dropped here through a wormhole. But…it’s still Quake? I still had fun? I don’t fucking know.

It’s going to be more alive than Reflex, I guess. At least for a while.

posted on May 17, 2017
earlier: Demon Phaleg, Lord Of Jank
later: Brook converters: Not just for consoles