Junkfood Arcades' Snack Box Micro is currently my main arcade controller. I don’t really do hardware reviews, but most of the information on it online seems kinda scattered and meandering, so I figured I’d take down some of my thoughts. 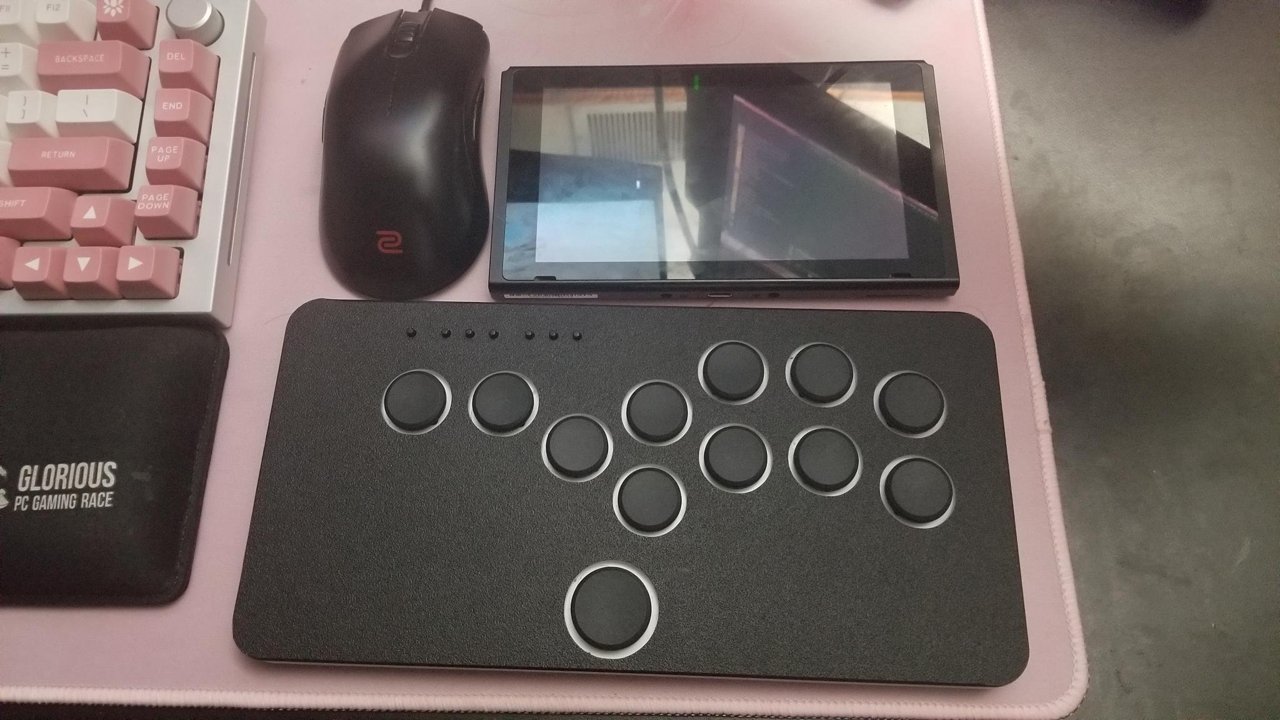 I have no financial relationship with Junkfood Arcades. I’ve done my best to be unbiased, but people have a tendency to justify purchases to themselves, so be critical while reading and try to do good research before making choices.

I won’t go over the benefits of a stickless controller versus a “traditional” one here. I like them and they’re easier on my hands; if you’re trying to decide whether to switch, use a Hitbox-style layout on keyboard for a while, keeping in mind that the “real thing” is slightly more comfortable and allows for SOCD tricks that the keyboard method doesn’t.

If I encounter a problem with the Micro, I’ll note it here, along with the date it happened. If you don’t see anything like that here, you can assume it’s been working fine since I posted this article.

This thing is small, which is pretty much the entire point. This makes it pretty travel-friendly—yes, it does fit in a pocket, though awkwardly—but no one is traveling right now, because we live in hell. Despite the small width, I find it comfortable for lap use, though it’s most comfortable with the heavier backplate.

For me, the main draw of the size was actually its thickness; taller controllers, like my previous one, can be uncomfortable for desk use because of how high your hands sit, putting extra strain on your wrists. Even with the heavy backplate, the Micro is thinner than any other controller I own by at least a factor of 3. 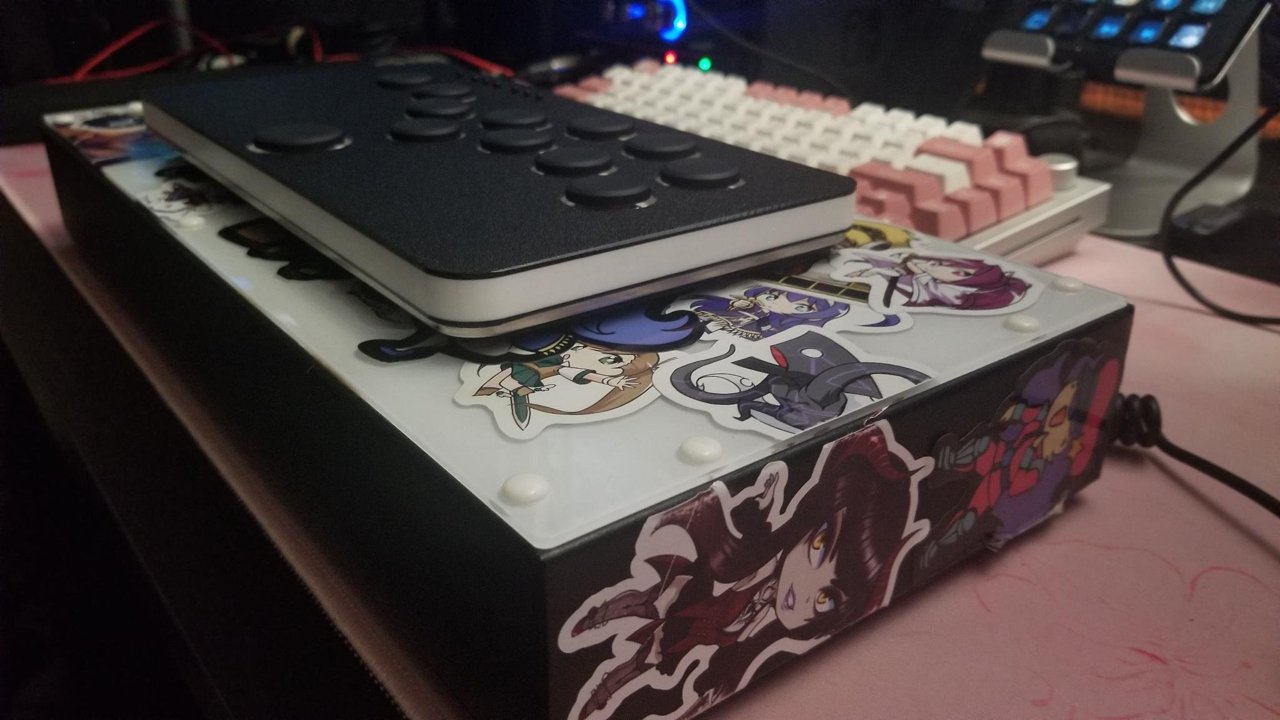 The front of the Micro is very slightly textured and seems to repel all adhesives, meaning no stickerbombing. (An artwork case is supposedly planned in the future.) The edges of the controller are beveled, but the very corners aren’t, so you may deal with some rough edges if you leave your hands at an extreme angle.

Early versions of the Micro had roughly-textured pushbuttons, but the May 2021 batch and onward use a new PBT injection-molded keycap; it’s smooth, very very slightly concave, and beveled at the edges. I dig it.

I’ve never really liked standard arcade pushbuttons: Sanwas feel rattly and mushy to me, Seimitsus feel like clunky plastic inside and out, and even my preferred pushbuttons (Crown 202s) wobble in their housings in an unpleasant way. The Micro uses Kailh Choc mechanical keyswitches, making it feel more like a keyboard than a traditional arcade controller, and I prefer that by a longshot.

The Micro ships with Kailh’s low-profile Choc Reds—medium actuation force,1 no tactile bump, no click—but the hotswap sockets allow you to replace them with any variety of Choc switch. If you habitually slide or piano, look into gChocs for their extremely low actuation force; if not, you may want to look at the clicky/tactile options for stronger physical feedback. Note that Kailh makes a lot of switches, but only their Choc series will fit here.

I recommend MKUltra (not an affiliate link) for purchasing mechanical keyboard switches in the US. There’s also a table on that page going over the various varieties of Choc switches. (If my recommendation changes, this section will go away.)

Sadly, only the 12 main control buttons use Chocs; the 7 “option” buttons, just above the leftmost control buttons, are basically rounded plastic nubs slotted into holes in the case, balanced on top of microswitches on the PCB. They’re functional, but they require way too much force for their small size, making them uncomfortable to hold or rapidly press. They also rattle faintly if you shift or shake the controller—this is never audible in standard use, and is extremely quiet even if you’re literally shaking it like a maraca, but you may feel them wobble slightly under your fingers when pressed.

The back plate has a soft non-slip covering, but the screw holes are barely recessed and the cuts in the backing are irregular. On my unit, sliding the controller leads to at least one screw scraping against my desk, no matter how I position or tighten them. Removing some foam or sanding down the screws would probably work to resolve this, but needing to do it is frustrating. 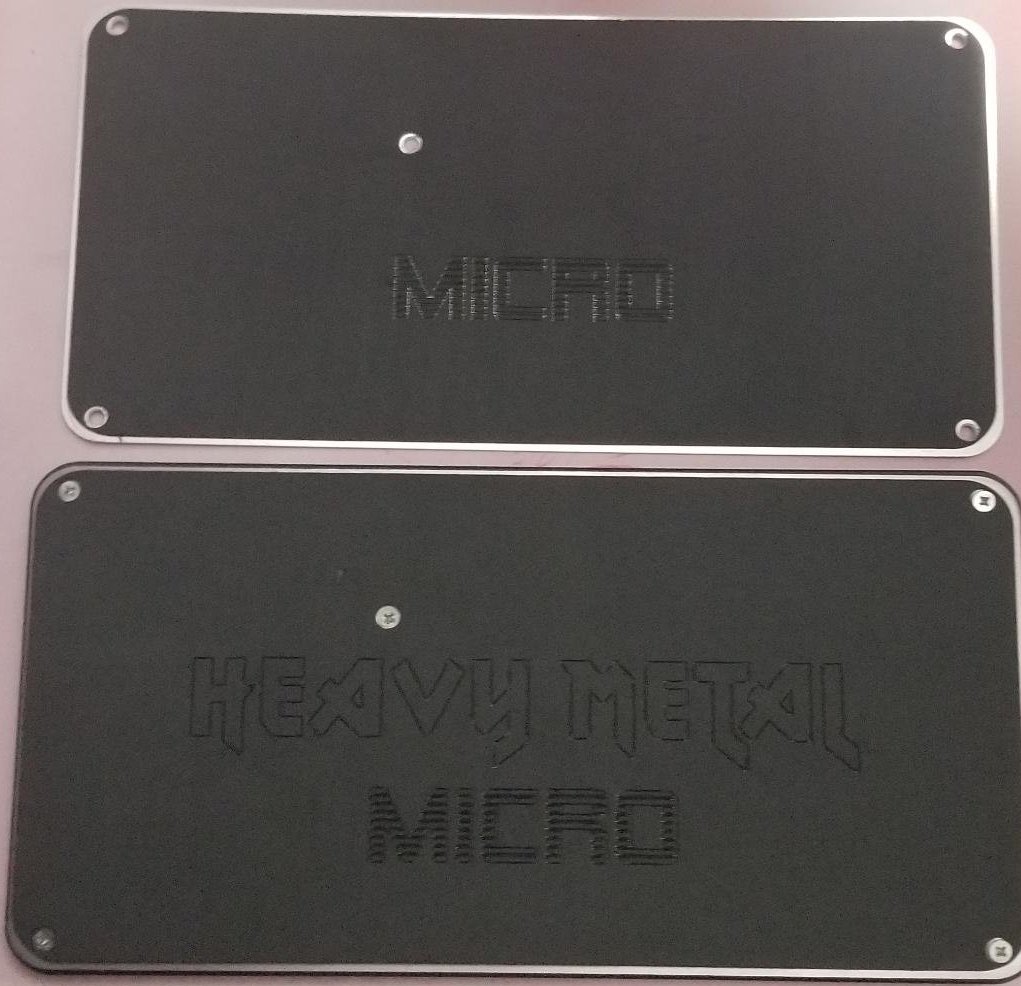 I also ordered the alternate “Heavy Metal” back plate, which doesn’t exhibit these problems (see shitty comparison photo above); the backing is thicker and the cuts are much larger, giving the screws plenty of room. However, this plate adds some thickness and a significant amount of weight; picking it up with 2 fingers is still possible, but definitely no longer comfortable. You’re also paying for the addon.

The Micro uses, uh, Micro-USB, which has a well-documented history of being the worst connector on the planet. The port is wide and recessed, presumably to protect the PCB while allowing for more cable clearance, but it looks a little bare and exposed—in good lighting, you can just straight-up see the board. I chose to use a magnetic cable (not an affiliate link, just wanted to provide a compatible cable) to avoid stressing the connector, and the magnetic “cap” sits comfortably flush while covering most of the port. Still, though, the decision not to use USB-C is completely baffling.

Console support is completely normal and unnoteworthy: works on PS4, works on Switch, just as advertised. PS5 support is planned, but according to Junkfood, you’ll likely need to send the controller in for an add-on board to be installed; if you do play on PS5, the PS4 versions of games still support PS4 controllers, including the Micro.

On PC, DirectInput controllers are a notorious headache for me, and many games will panic or ignore them unless you correctly configure controller-wrapping software. Thankfully, the Micro presents as an XInput controller, which is a pleasant surprise—most third-party PS4 controllers, as well as the DualShock 4 itself, present as DirectInput. Good shit.

The Micro’s own lighting configuration is functional, but rough around the edges; in edit mode, animations will occasionally get stuck or fail to display until you unplug and replug the controller. The “heatmap” functionality is a pretty neat look, IMO—pressed buttons will light up in a color of your choosing, fade to a secondary color of your choosing, then fade out. Sadly, the idle animations are pretty scant, and many of them look like recolors of each other, with no color or speed configuration. You can also set up static single-color lighting or disable the lighting entirely.

Here are a few highly unscientific sound tests. Sound reproduction is hard, and much of it depends on microphone technique/placement and room acoustics; these are only provided for comparison, and you shouldn’t expect any of these controllers will sound exactly like this for you IRL.

I do want to look into ways to silence the pushbuttons and switches in the future, since I appreciate technology that shuts the hell up, but I like the sound profile of the Micro more than my other arcade controllers: way less disruptive.

The dampening foam mainly changes the character of the sound, rather than the volume. The downstroke is significantly deeper, but only slightly quieter, and the upstroke is noticably higher-pitched by comparison. You also lose a very small amount of travel distance, which may or may not be your thing.

Removing the stabilizer bars in the Choc switches is pretty straightforward, and seemed to remove some very faint high-pitched rattle caused by the metal wire while having no negative effect on feel. YMMV. Most people will likely not care enough about the particulars of the sound profile to do this.

For $200, I can’t name a controller that fits my needs (small size, cozy desk profile, good button feel) better. Fit and finish isn’t perfect, the option buttons are pretty bad, and Micro-USB is just…utterly baffling (why???), but those feel like comparatively small nitpicks at this price point and feature set.

I hope to see some competition or revisions, but bottom line, this is the most comfortable arcade controller I’ve ever owned—and I struggle with wrist strain, so that difference is invaluable to me. On the other hand, if you’re happy with the ergonomics of your current controller, you can probably skip the Micro unless you value the form factor for travel (or if you share my animosity for traditional arcade pushbuttons).

The closest competing product is Paradise Arcade Shop’s MPress, which uses Cherry MX switches and boasts a similar form factor—though it trades some portability for a wrist-rest space. It also has full-size option buttons, comfortably beating the Micro, and offers some color customization options that the Micro doesn’t, but it’s pricier ($225) even before addons like hotswap sockets and lighting.

(It seems like LEDs are supposed to be another $65 and hotswap sockets are another $20, but Paradise’s online configurator reports a base price of $0.00 at the moment, so I don’t really know what’s going on?)

Anyway, at the time of this writing, they’re also both sold out. 👍