It’s turn 8. Somehow, your hand is empty. You are battered, bruised, clinging to life. A small army of fairies stares you down from the other side of the board. Automatons, mass-produced, expendable. They look past you, their glass eyes empty.

Swordcraft reimagines Shadowverse as a distorted Bayesian hellscape, where every basic rule is twisted through an incomprehensible kaleidoscope of meaningless improbabilities. It’s an unending nightmare realm of empty hands and bloated curves, where all possible worlds are laid bare and you’re left to grapple with the knowledge that you have always lived in the worst one. Grit your teeth, brace against the storm, and you only draw yourself deeper into the void, searching for patterns in the wallpaper until the noise swallows you whole.

Nothing that has ever happened means anything. This is the rule that Swordcraft players live by. You embrace the noise—throw yourself headlong into the screaming chaos, your deck psychotic chickenscratch to be carried out blindly for what remains of eternity—and you die.

I play Swordcraft. I dusted every card that isn’t Sword or Neutral, for reasons that made sense at the time and probably had to do with Erika’s stupid poofy tutu-dress thing. I’m stuck with Swordcraft, and Swordcraft is stuck with me—partially because I have no choice, but mostly because I am a dumb and stubborn motherfucker.

Summarizing Swordcraft’s shortcomings is like listing the drawbacks of lung cancer.1 It implies that there are positives, that there is something to be salvaged—that Swordcraft itself is not fundamentally broken, that any of it still functions. But we can look at the wreckage and draw some conclusions.

It’s December 11th, 2017. I’m delirious and feverish, dragging my aching body into a $10 IKEA chair to sit down and complain about video games on the Internet. Let’s figure out how the hell this happened.

Cards that don’t do anything 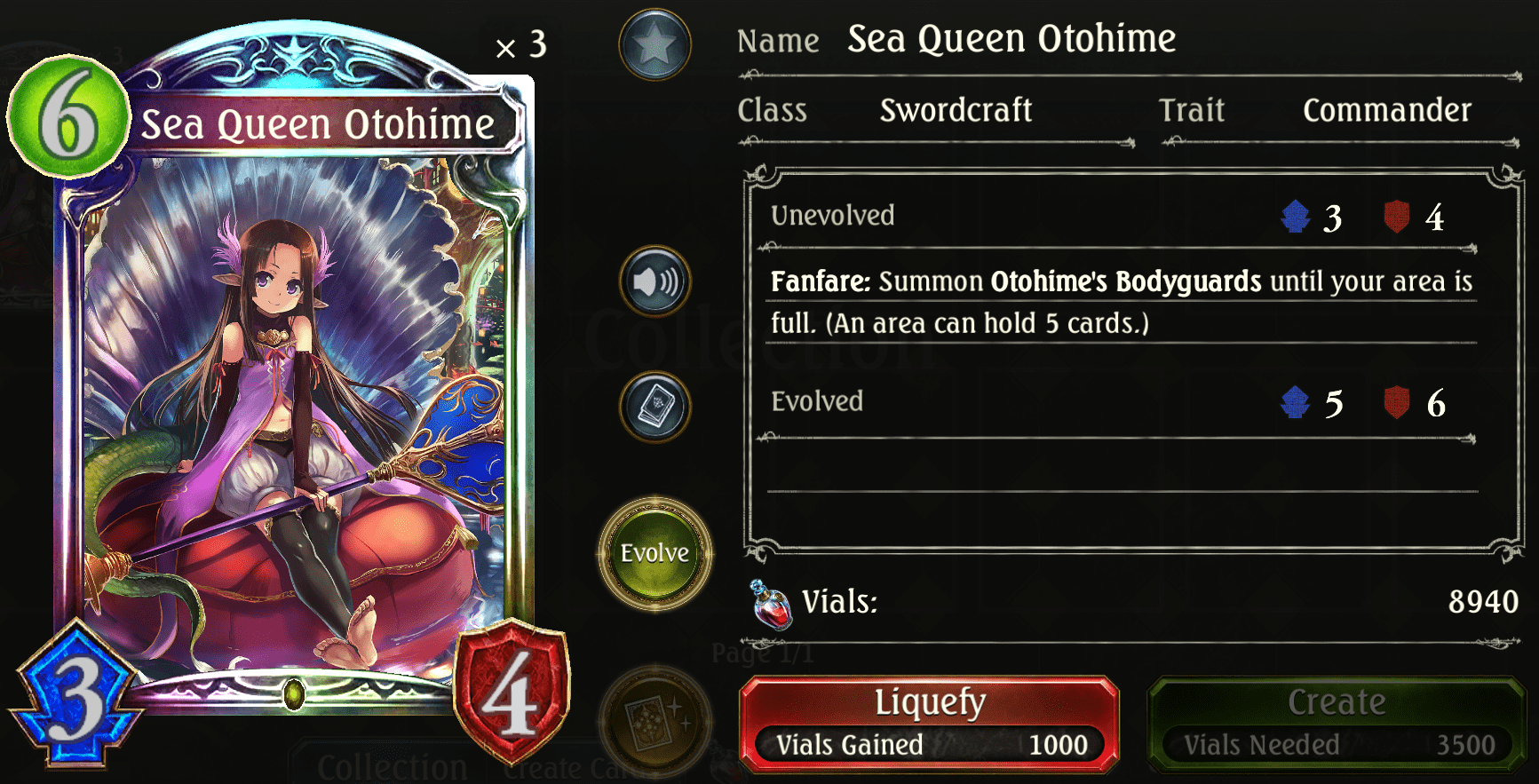 Otohime has never experienced hardship or pain in her entire life. I know nothing about extended Shadowverse lore, but I am 100% certain of this. She lives in an ivory tower, servants catering to her every whim. She is also no older than 10. When I first signed up for Shadowverse, someone told me that she was a good legendary and that I should keep her, an act of cruelty I will never forget. I crafted two more.

In the year 2018 minus three weeks, Otohime’s lifespan is roughly half a turn. She hits the board, you evolve her into the nearest obnoxious follower, and her remaining 2 life is annihilated by the opponent’s board clear of choice, taking her powerless bodyguards with her. One or two may survive, mentally broken, screaming “You’ll never hurt Otohime!” as they feebly ram themselves into stronger followers, atonement for their failures. Otohime is dead, and her guards seek to join her.2

If Otohime had been printed for any other craft, her card text would be a little longer. She wouldn’t just flood board; she would give her tokens Ward, or she would heal in Overflow, or [TK: what the fuck does bloodcraft do this xpac???]. But she’s a Swordcraft card, and she gets no such concessions; the tokens are Officers, targets for other cards like Sage Commander and Captain Walfrid, and that’s expected to be enough. Countless token-generators and big-body buffers follow the same philosophy, and you can neuter any of them by doing literally anything about the board.

Otohime turns your board into an elementary school classroom, expected to contend with trained assassins, battle-hardened warriors, and literal fucking dragons. This is the backbone of Swordcraft. This is the identity the class is based around. The 3rd-graders are instantly murdered, and as you spend your evolves trying to stablize, your opponent casually taps your face, waltzing towards their win condition.

Cards that don’t draw anything

Not every Swordcraft card is bad, but you can never build a deck around the good cards—you’ll just never see them. Without draw power, combos are impossible to set up,3 control lists are starved for staying power, and even midrange lists can get stuck without their finishers.

I searched every Shadowverse card for the word “draw.”4 77 cards came back, and 5 of them belong to Swordcraft. Let’s ignore how incredibly pathetic that number is, and take a look at how Sword manages hand size.

Mentor’s Teachings: 1PP, +1/+0 target follower,5 draw a card. Acceptable cycle in aggro decks, which don’t need cycle. I have heard Rune players refer to this as a 1PP Magic Missile, and it’s somehow not the dumbest thing I’ve heard from Rune players. I hate all of you.

Rabbit Ear Attendant: 3PP 2/3, draw a card for each Neutral follower in play. This is typically cycle if turns 1 and 2 happen like usual. Probably made a lot more sense before Goblin Leader got nerfed, but potentially comboable with Council of Card Knights on turn 9 for a whopping +1 to hand size! Wow!

Thief: 3PP 2/2, draw a card on clash. Almost every follower in the game can kill this by running into it, and it also dies to almost every early-game spell. Your best chance to draw a card with this is evolving it. Cycle at best.

Spring Cleaning: 1PP amulet, countdown 3. At end of turn, discard one of the highest-cost cards in your hand, then draw a card. It cycles cards you want for cards you don’t want. Long after Shadowverse is discontinued, after virtual reality and neural interfaces replace traditional video games, after the Earth itself becomes a dying husk of a planet, a monument to man’s hubris…people will still be trying to figure out why Cygames printed this card.

So, of these 5 cards, 4 of them are basically limited to cycle. Let’s take a look at the last one. 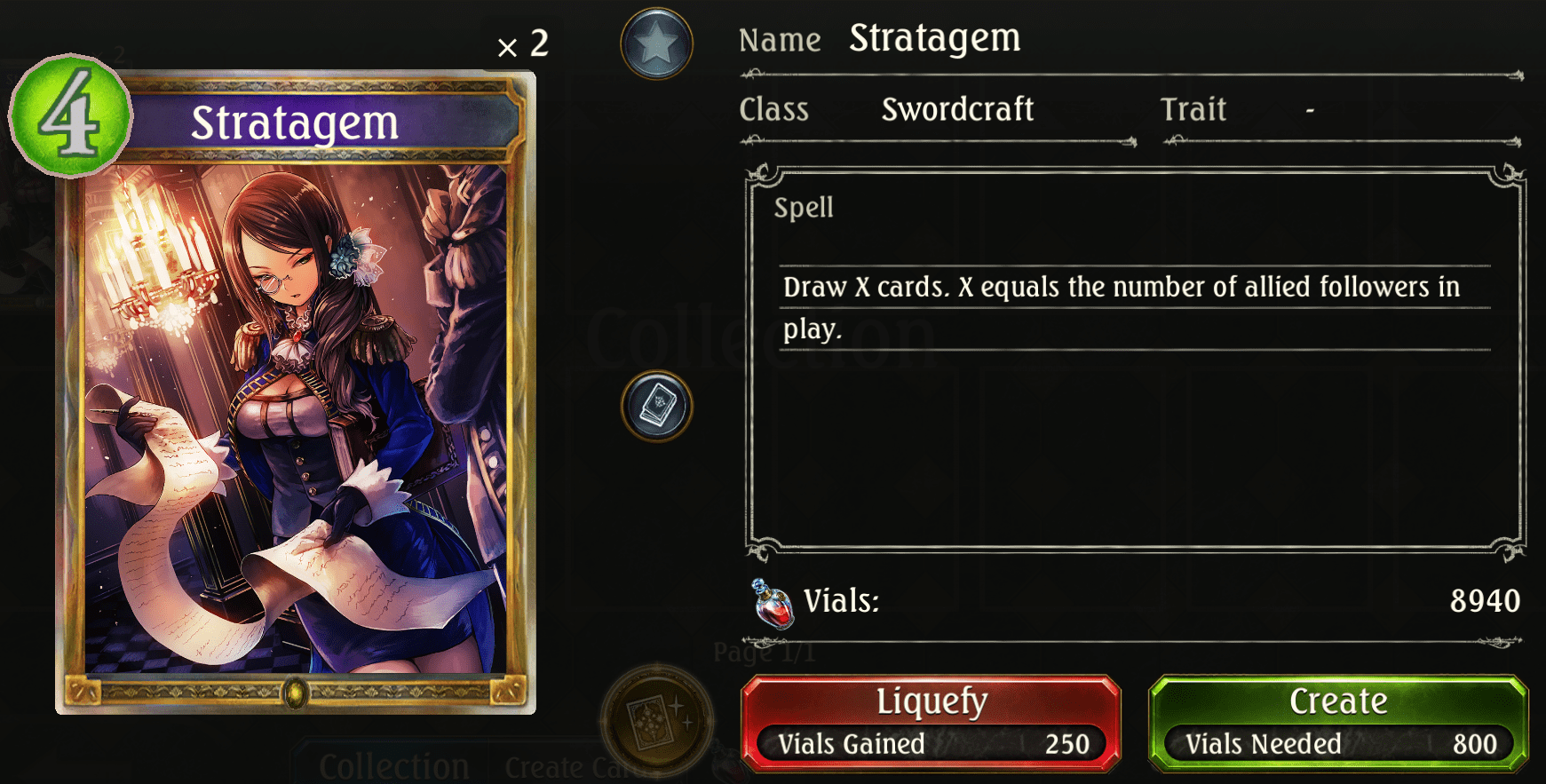 …I feel like we’ve already talked about this problem.6

Compare these cards to Globe of the Starways, Demon Eater, Dire Bond, Nature’s Guidance…basically any draw source that isn’t Swordcraft’s. They all play into the craft’s gimmick, refilling their hand while giving well-constructed decks a mechanic to work with. They’re not flawless for tempo, but the tools you draw can help you stabilize. In Swordcraft, to go up in hand size, you pass your turn, pull out a megaphone, and scream at the top of your lungs, wearing a matching neon sandwich-board: “IF YOU PRESSURE ME FOR TEMPO I AM GUARANTEED TO LOSE.”

If you want any staying power in a Swordcraft deck, you have to load it with late-game tools and pray you don’t brick. The odds are overwhelmingly against you. Run a small amount of draw tools, and you’ll see them at the worst possible times. Run a large amount of draw tools, and they’ll draw themselves, useless cards eating up turn after turn while your opponent mounts an advantage. There is no winning here. You spend every game waiting for your deck to produce the right cards, knowing on an instinctual level that it will never happen.

No wonder everyone just plays aggro instead.

To play aggro Sword is to embrace chaos. You are no longer playing a card game. You are an empty vessel for the will of the Random Number Goddess, a catalyst unleashing blind chaos unto the world. You take every Storm card in the craft (gifts from the Make-A-Wish Foundation to help ease the pain) and ram them all into your opponent’s face. A robot could do that, but it could never win, because this deck feeds on human suffering, and every card in your deck is ordered to inflict as much pain as possible.

With the exception of Wonderland Dreams, which we should probably collectively forget about, Aggro Sword has been the only ladder-capable Swordcraft list for a long time now. I think Cygames realized that they couldn’t un-print all the staple utility cards in the game, figured that Swordcraft’s core identity could no longer exist, and just started printing as much noninteractive damage as possible to keep the craft somewhat alive. It pushes the meta faster and faster, and Swordcraft’s true identity is buried deeper and deeper.

Aggro Sword isn’t always the fastest aggro deck in an expansion, but it’s always the most maligned, and I’ve come to think of this as the first documented case of directly transferring anguish via Internet. To reach a place where you even consider playing aggro Sword, you need a deep-seated contempt for the game you’re playing, and everyone who’s playing it with you. It is the most impure act of malicious surrender, closing your eyes and falling backward into the sea of noise with nothing but blind, white-hot hatred in your heart. Nothing matters anymore—only that everyone else in the world shares in your suffering.7

People should not have to feel these things.

I don’t know if I can talk about this anymore. I’m not sure if there’s anything to say, either. Chronogenesis is on the horizon, and I guess I’m probably supposed to talk about that, but so far every Swordcraft reveal has been worse than garbage, the kind of unplayable messes you’d throw away even in Take Two. I don’t think Swordcraft is getting stable card draw or durable boards. With Standard and Darkness Evolved stripped from the new competitive format, and an Albert reprint on the way, maybe this is the last we’ll ever see of what used to be Swordcraft. Maybe they’ll throw away the Commander and Officer tags, rename it Stormcraft, and I’ll finally be able to fucking die.

That’s what my brain tells me, but when it comes to Swordcraft, the human brain isn’t worth much. Maybe each new expansion is another card off the top, another wave of inscrutable random noise. Maybe Cygames is harvesting my anguish to appease an ancient and powerful evil, pure chaos and anger manifest. Maybe they’re really bad at designing cards. Maybe this is an incoherent rant with no basis in reality, and my headache will be gone in the morning. Maybe the headache will be worse. Maybe both of these things are always happening.

You turn over the top card and you don’t even bother looking.